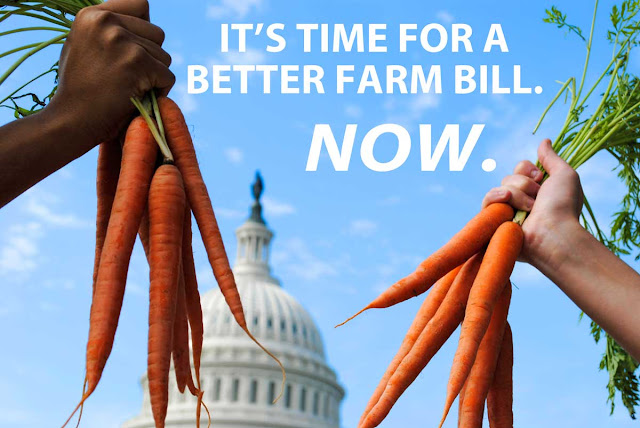 This was taken directly from an email I received from the Weston A. Price Foundation. Some or maybe most of you are not members of the Weston A. Price foundation and I thought this was really good information for everyone to read. We need to work together to make sure our voices are heard and not let big corporations like Monsanto take over our farm bill.

Having failed to pass a Farm Bill as scheduled last year, Congress is trying again.  Last week, both the House and the Senate Agriculture Committees met to develop the draft bill.

This week, the full Senate is scheduled to debate the Farm Bill, S.954.

Like the last several Farm Bills, the proposed Farm Bill will generally support the large consolidated corporate agriculture system.  There are no proposals on the table for systemic changes, but there are several potentially significant amendments on specific topics that affect sustainable farmers and local food consumers.

Please take action – call your Senators about the amendments listed below!
TAKE ACTION
Call the Capitol Switchboard at 202-224-3121, tell them your state and ask to be connected to your senators’ offices.  Remember that you should call BOTH senators from your state.

You can also find out who your senators are and their contact information at www.senate.gov

1)  Vote YES on King’s Amendment #1042 to clarify the exemption for small farmers under the Food Safety Modernization Act;

2)   Vote YES on the Tester “Seeds & Breeds” Amendment #972 to dedicate a portion of USDA’s research to classical breeding;

4) Vote YES on Wyden’s Amendment #952 to remove the prohibition on planting hemp;

5)  Vote NO on Johanns’ amendment to eliminate Country of Origin Labeling (COOL).
More information on each amendment is provided below.

When the Food Safety Modernization Act passed Congress two years ago, it included a very important provision that exempted small-scale, direct-marketing farmers from some of the burdensome new regulations.  The Tester-Hagan provision of FSMA was a vital protection for local food producers.

II.  Support non-GMO seeds – vote YES on Senator Tester’s Classical Breeding Amendment #972.
More and more, agriculture research is controlled by corporations who are focused on expanding their genetically engineered crops, and every year farmers are left with fewer choices of seeds that are not genetically engineered. Farmers who want to avoid growing genetically modified organisms (GMOs) simply don’t have good alternatives.  And when farmers have no options, consumers have no options.

Classical breeding is a proven science to meeting our food and fiber needs.  Classical breeding is critical to the development of varieties that are suited to the many different geographic regions and conditions in our country.  The resulting genetic variety is vital to our national food security.
In the 2008  Farm Bill, Congress directed the USDA to make classical plant and animal breeding a priority for funding, but the agency imposed hurdles in the grant-making process that have undermined this Congressional mandate.
Senator Tester’s amendment corrects problems in USDA’s breeding grants by prioritizing public cultivar and breed development through classical breeding. It also removes hurdles that hinder USDA’s progress toward this goal.

The amendment does not call for any new expenditures by the government, nor does it stop all funding for GMO research.  It is a modest approach that allocates some existing research money for non-GMO research.

Please tell your senators to vote YES on the Tester Classical Breeding Amendment #972.

III. Support farmer and consumer choice – vote YES on the amendments to restore judicial review of GMO crops (#978), ban GMO salmon (#934), and support labeling at both the federal and state levels (#965 and #1025)

In the last continuing budget resolution, which funds the federal government through September of this year, pro-biotech forces successfully inserted a provision that has been dubbed the “Monsanto Protection Act.”  This provision allows companies like Monsanto and DuPont to continue to sell genetically modified (GMO) seeds for planting even when a court of law has found they were approved illegally.  The provision forces USDA to grant temporary permits and deregulate GMO crops even if a Federal court has ruled that USDA hadn’t adequately considered the environmental or economic risks to farmers. This destroys any meaningful judicial review of USDA’s decisions to allow commercialization of GMO crops.

Senator Merkley of Oregon has announced his intention to introduce an amendment to repeal this pro-biotech provision.

Please tell your senators to vote YES on the Merkley Amendment to restore judicial review of genetically engineered crops.

The FDA continues to consider the application for AquaBounty’s genetically engineered salmon, and appears likely to approve it.

The salmon has been genetically altered to produce extra growth hormones, allowing it to grow faster and bigger than natural salmon.  There are no independent studies on the salmon’s safety.  FDA instead relied on the false assumption that GMO foods are “equivalent” to natural foods, as well as data provided by the company that created, and stands to profit from, the GE salmon.  At the same time, FDA ignored the concerns raised by thousands of Americans and dozens of legislators and scientists, including the National Oceanic and Atmospheric Administration (NOAA) and the U.S Fish and Wildlife Service.

Since it will not be labeled, people will have no way of choosing to avoid genetically engineered salmon in the stores if this fish is approved.  In addition, the GMO salmon poses a threat to those who wish to eat wild salmon or other seafood. If the GMO salmon escape from the fish farms, which is all too likely, they could devastate native salmon populations, as well as the fish and marine mammals that depend on salmon for their food.  Scientists have predicted that escaped GMO salmon would likely wipe out wild salmon populations, which will destroy the livelihood of coastal communities that depend on fishing.

Senator Boxer’s Amendment expresses support for labeling of GMOs, although it does not directly mandate labeling. “It is the sense of the Senate that the United States should join the 64 other countries that have given consumers the right to know if the foods purchased to feed their families have been genetically engineered or contain genetically engineered ingredients.”

Senator Sanders’ Amendment respects state rights and state power.  Last year, at least two states were threatened that Monsanto would sue their states if they passed a GMO labeling bill.  Sanders’ amendment simply confirms that states have the right to adopt GMO labeling laws if they choose to, protecting them from lawsuits based on federal law.

Please tell your senators to vote YES on Boxer’s Amendment # 1025 to support labeling of GMOs and Sanders’ Amendment #965 recognizing states’ right to adopt GMO labeling requirements at the state level.

IV.  Support farmers freedom – vote YES on Senator Wyden’s industrial hemp amendment
Senator Wyden has introduced an amendment to allow American farmers to once again grow hemp to the extent that it is allowed under state laws.

Industrial hemp is the non-psychoactive, low-THC, oilseed and fiber varieties of the Cannabis sativa plant. Hemp has absolutely no use as a recreational drug.

Hemp is planted in many countries, and is legal to use in the U.S. – but it is not legal to plant it in the U.S.  The seed is known for its healthy protein and rich oil. The outer fiber from the stalk can be used for clothing, canvas and rope; the inner core fiber can used for construction and paper production.   This crop provides excellent opportunities for farmers for a sustainable, profitable crop.

To date, thirty-one states have introduced pro-hemp legislation and nineteen have passed pro-hemp legislation; nine states (Colorado, Kentucky, Maine, Montana, North Dakota, Oregon, Vermont, Washington, and West Virginia) have defined industrial hemp as distinct and removed barriers to its production. Passage of the Industrial Hemp Amendment to the Farm Bill would finally allow these states to choose whether or not to let farmers grow industrial hemp.

Please tell your senators to vote YES on the Wyden Hemp Amendment.

V.  Uphold Country of Origin Labeling (COOL) – vote NO on Senator Johanns’ amendment to eliminate it
For years, American farmers and consumers have fought to get mandatory Country of Origin Labeling (COOL) for food products, so that consumers could know what country their food came from.  The 2008 Farm Bill included a provision for COOL, but the regulations implementing it were struck down by the World Trade Organization (WTO).

The USDA has proposed revisions to the COOL regulations to address the WTO’s objections.  The proposed COOL regulations are better than the previous version, providing more information for consumers about where livestock and poultry were born, raised, and processed.  More than 200 groups submitted comments to USDA supporting this approach.

The large meatpackers, however, don’t like this and are trying to get COOL eliminated in the Farm Bill. Senator Johannns is expected to introduce an amendment to eliminate COOL on livestock and poultry products.

COOL is already the law of the land – it should not be reversed in this Farm Bill. The USDA’s proposed changes provide honest labeling for consumers while addressing the WTO’s concerns.  Consumers deserve the right to know the source of their food and U.S. farmers and ranchers should be allowed to promote their products with pride.

Please tell your senators to vote NO on any amendment that eliminates country of origin labeling.