Did you know that a genetically engineered version of salmon may be hitting stores near you? Even if you did know, you wouldn’t know. Why? Because it will not labeled.

A salmon that has been infused with an eel-like creature to grow bigger, faster than conventional farm raised salmon. We like to call it, Frankenfish.

This last Saturday I was part of an event by GMO-Free World: Global Days of Action and joined 100 other people in San Francisco to march against genetically engineered salmon. I was able to get my cousin to come with me and I believe I have turned her to the dark side…. 🙂 If you have never been part of a rally, march or protest; it is quite the experience. I was a part of the Proposition 37 rally last year and I had such a great time doing it. Once you are involved in one, it is hard to say no to the others.

It’s a great opportunity to speak to like-minded people as well on the topic and get different perspectives of why they believe the FDA should not approve Frankenfish.

We stood in the middle of Embarcadero holding signs, and passing out flyers. A couple people spoke about genetically engineered salmon as well. I did not hear the talk because I was busy standing by the side of the road talking to people. After a few hours of doing this, we marched 10 blocks down Market Street chanting various chants on the mega phone. I was privileged (and unexpectedly) to be the one chanting down the streets. I had SO much fun. The chanting was a little rocky at first but once we figured out the wording, it was a piece of cake!

Some of our chants included: (short little video above of one of the chants)

“Hey hey, ho ho, frankenfish has got to go!”

“Tell the FDA today, take that frankenfish away!”

“We don’t want no frankenfish, on our plate or on our dish!” 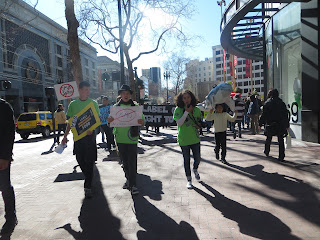 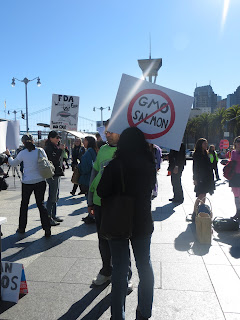 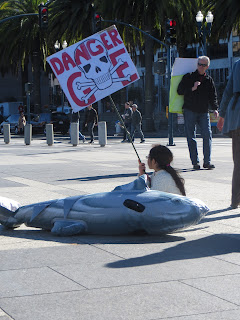 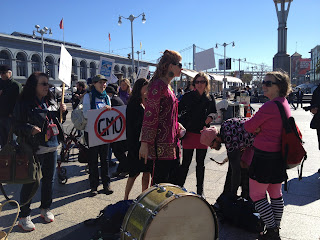 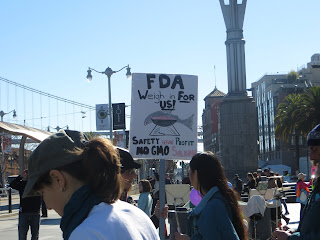 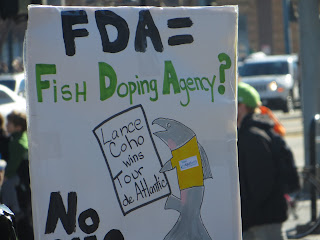 The FDA just recently extended their comment period for another 60 days which is great for us because now we have more time to educate the people about GE salmon.

My thoughts on why GE salmon should not be passed?

1. Environmental Impact: Let’s face it people, things escape. Frankenfish will be raised in water pens right next to the natural environment so it will be easy for the fish to swim away and cause havoc. What will happen to the wild salmon populations when Frankenfish compete against them for food, mates and space? It is said that within 40 generations wild salmon could become extinct! Scary, right? What happens to the animals that depend on salmon for their food? If GE foods are known to cause reproductive issues, organ failure and all other sorts of nasty things, what’s to say it will not happen to the animals who feast on salmon? Have you read my post about the Orca’s and PCBs? It is quite possible for populations to weaken and suffer and eventually die off.

2. Health of Humans: I strongly believe the food which we consume should not be injected or sprayed with any unnatural things (antibiotics, hormones, pesticides, herbicides, oh and you know, genes from other viruses, plants, bacteria). Our bodies were not designed to eat things that have not been made by Mother Earth. When we start adding all that junk into our diet it does not take a freaking rocket scientist to figure out that we become sick from it. Just open your eyes and take a look at how unhealthy our country is!

3. No Studies Have Been Done: Not surprisingly, the FDA is solely relying on the studies done by the company who produced Frankenfish. They will not perform any of their own studies to double check the information. They have stated it has “no significant impact” on the environment. — Let’s all give a round of applause to the FDA for caring more about money than the health of our society….

Oh, the little prelimary data that has been done shows that GE Salmon could pose a greater food allergy threat because of much higher levels of allergy-producing compounds in the fish. If you thought it could not get any worse, it can. Frankenfish has IGF-1 which is an insulin-like growth hormone. IGF-1 is not only a known carcinogen but could potentially (and most likely) have other long-term effects that we have no clue about.

They have to be stopped. Don’t you agree? I most certainly care too much about the earth and all it’s living beings to not do something about it. Even if you are not an animal lover or consider yourself a “tree-hugger”, think about the health of your children and grandchildren.

Do something today about it. Call the FDA, write them a letter, sign this petition, go to your grocery store and tell them to say NO to GE Salmon. Tell your friends and family to do the same. Do everything you can to stop this from happening.