Do you ever remember playing monopoly as a kid? Or even as an adult? You go around and around the board collecting as much money as you can so you can buy as many houses as possible. The more houses you put on each square (eventually buying a hotel), the more money you get if people land on it. The goal is to try and obtain as many properties on one color so you control that specific area of the board. If you are doing really good then you most likely have properties on every side of the board. At that point, you’re racking in the money and before you know it, you monopolize on everyone because they have no choice but to pay you.

What if I told you a huge game of monopoly is happening at this very instant? That someone is currently trying to monopolize on the very essence of life and it’s happening right before our eyes.

Ladies and Gentlemen, I’d like to introduce you to Monsanto Company.

The Reality of Our Food Supply

If I am the first one to tell you this, I apologize in advance for possibly leaving a sour taste in your mouth.

Okay, here we go. The reality is this: Your food is being held hostage.

But the problem is… they don’t want to give it back… no matter what.

Who is holding our food hostage? Well, the big agribusiness corporations like Monsanto, DuPont, Bayer, Sygenta, Dow and BASF. But the golden company here is Monsanto.

Sure, you may be able to go to the grocery store and pick up however many packages of Goldfish, Oreos, or Wheat Thins that you want. But let me clarify one thing. Goldfish are not food. Oreos are not food. You guessed it, neither are Wheat Thins. They are what we call… junk.

Listen, I’m not hear to make anyone feel bad about what they eat. I used to buy the Wheat Thins and Oreos and Goldfish and every other brightly colored and brilliantly displayed package of junk that you can find on the shelves at your neighborhood chain grocery store. As long as you know what you are eating and I mean, really know and are aware of the health concerns and are OK with them…. then by all means, eat them.

And don’t let me make you think that I’m perfect either. As much as I advocate a GMO-free diet it is inevitable (unfortunately) that I will consume a GE product in the future.

The difference between myself, consuming an occasional GE product, and the average Jo, consuming GE products on a daily basis unknowingly, is that I am aware of what I’m eating. I’m not blindly eating something and believing in a fairy tale land where the food is regulated by a government that actually cares and makes sure what we are eating is safe.

OK. I’m going to stop myself before I get on a rant about that topic…..

Let’s get to the the food that is actually being held hostage with no intentions of any ransom of some sort: Seeds.

Before we get into the who’s, what’s and why’s let’s take a brief overview of what life would be without the existence of natural seeds and why we need them….

Without seeds we would not have:

Did I miss anything? Any person reading this would say “Gee, that is a problem.”

Of course unless you are the CEO of Monsanto Company then you don’t see this as a problem, you see it as an opportunity; to monopolize on life itself.  You believe in patenting seeds so you can own the rights to the world’s supply of food. Since you own the rights to seeds, you don’t mind suing those neighboring sixth generation farmers (because of cross contamination from YOUR fields) for patent infringement which puts them out of business, forever. You don’t care because then you can buy the land and plant your own field of mono crops, thus depleting the soil of all it’s valuable minerals and nutrients.

All of this out of greed and the intents of monopolizing our food supply so in the end there are no natural seeds left in existence. Seriously!

How is Monsanto Monopolizing Our Food Supply?

Over the past 15 years or so Monsanto, along with 4 other biotech giant companies, have bought out more than 200 small seed companies. Why? To dominate the supply of course. Just like in our game of monopoly, the more houses we buy, the less there is left for anyone else to buy. More property equals more money which equals more control. The same goes for Monsanto… the more seeds they buy, the more control they have over the people who need to buy the seeds.

If conventional farmer’s can not find seeds that are not genetically modified then guess what they have to plant? GM seeds.

Traditionally for the past several thousands of years, collecting, saving and replanting seeds from one year to the next served as an essential part of our survival. Seed saving is the reason our current crops came to be, which were selected for various traits over generations and traded across regions and continents. This selection lead to a genetic diversity of crops adapted to many growing conditions and climates, and created a large base for our food supply. (source)

Now, because Monsanto owns most of the seed supply, farmer’s can not save their seeds. Under contract, they must buy new seeds from Monsanto every year, no matter if there is a price increase or not (which you can bet your buns there will be). We also can’t forget about the rising costs of herbicides and pesticides that are necessary for the GE plants. Unfortunately, the high dosages of these chemicals create weeds and bugs that are resistant to them. Problem for Monsanto? Heck no. Just create something even MORE toxic and add even MORE to the crops. Surely, that is the solution for their money driven intents.

I hope I’m not the only one who sees something seriously wrong with this picture!

Sadly with the up rise of biotechnology, industrial agriculture and restrictions on saving seeds, our genetic crop diversity has declined from 7,000 to 150 plant species. (source)

But Monsanto doesn’t just hold patents on GM seeds; they hold patents on common crop seeds – basically putting a patent on life forms. Their intent is to create a world with no natural seeds, only seeds that have been modified and/or patented by them.

Which is completely unacceptable in my eyes. And the eyes of thousands of people all around the world. And that is why March Against Monsanto was created….

Why Do We March Against Monsanto? 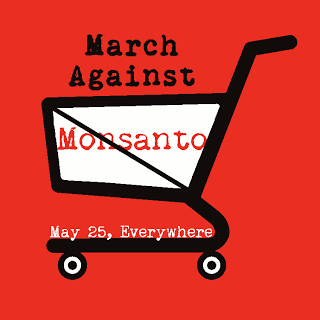 On May 25, 2013 people in over 250 cities in 36 countries that span across 6 continents will be Marching Against Monsanto to let everyone know we will not stand for cronyism and we especially will not stand for the poisoning of our families and the earth.

I have to say scrolling through the event list for the March Against Monsanto and seeing all the different cities all around the world that are participating in this event really gives my heart hope. I think it is truly amazing that in every spot on the globe people are coming together to defend their right for their food. It is uplifting to know so many people are not willing to throw in the towel and let companies like Monsanto destroy every living thing on the planet in spite of greed.

I’ll be attending the one in San Francisco and I hope you will find one in your area and attend as well! A quick note if you will be attending one… keep it peaceful! It is possible to stand up for what we believe in without letting emotions of hatred get in the way. We want people to see we are serious but it does not have to be in a negative way. The whole idea is to inspire people to say, “Hey, those activists are right, Monsanto should not have control over our food supply, and now I am going to find out what I can do about it.” Negative can only bring negative. So let’s make sure we keep it uplifting and have fun while we are making our voices heard.

Seeds are essential to life on this planet. In my eyes, absolutely no one has the right to patent the very essence of life. Who do they think they are? God?