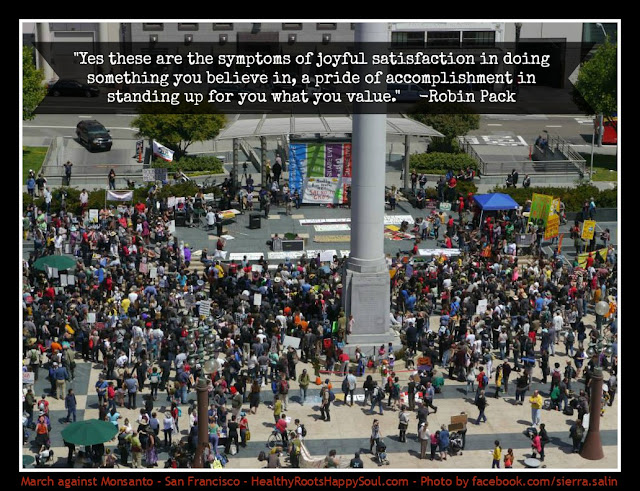 I was waiting in the line at the ferry building watching the boat quickly fill up and the long line that I was in not moving quickly enough. My stomach had butterflies; I was anxious and excited to march against the most evil company in the world. I thought for sure I wasn’t going to make the boat and the next one didn’t leave until 11:45 – the march was scheduled to start at 11am.

It must have been my lucky day.

They held the boat just a little longer and as soon as my feet touched the deck of the boat I felt at ease. I had made it — and just barely too because no more than 5 minutes after I got on the boat, we took off.

I found a spot standing up inside the boat and wondered to myself how the day would be and how many people would show up. I also noticed only one person who had a sign but the majority of people were going to the baseball game.

Almost immediately, a lady in a neon green jacket came up to me and asked me if I was going to the March Against Monsanto. I replied with a yes and she told me she was going as well.

We immediately clicked. It’s not every day you can talk to a random person about Monsanto and how “fucked up the whole situation was” (her quote). Well, maybe today it was really possible but still… as soon as she busted out with that I knew we were going to get along. The ferry ride seemed very short because we talked and talked and talked. We talked about political issues, food issues, health issues, and school issues. We talked about Weston A. Price and how she became an omnivore after 20 or so years of being a vegetarian because her health was declining. She said, “I had no energy, I was gaining weight and I never felt full. I believe my vegetarianism messed my thyroid up.”  She also told me now she feels she “can’t get enough of good meat and feels like she’s making up for lost time.”

Needless to say, there was a very easy ebb and flow to our conversation and I enjoyed it thoroughly.

The ferry docked and we decided since we both came alone that we would just stick together through the whole event. Usually when it comes to events like these I prefer to get there exactly on time but my friend (who was there already) told me the march wouldn’t start until 12. It was around 11am so when she offered to buy me lunch I wasn’t hesitant because I didn’t feel the pressure of getting to the event on time. I allowed myself to not be in such a hurry and enjoy the day as it came to me. We searched through the crowded ferry building and went to about 5 different places before we could pick one. She was picky and there “needed to be meat”. I was totally okay with that. 🙂 When we got to the cafe of choice we ordered sandwiches and house-made potato chips. I took a bite and noticed they were extremely oily.

I was curious. I asked the employee what type of oil they used to fry the potato chips in. His reply? “Canola oil.” I told Alison and we decided against buying them. I politely told him we were Marching Against Monsanto and it would be very hypocritical of me to eat something that has been fried in genetically engineered canola oil.

Yucky!  “Who uses canola oil these days any way?” She said as we walked away. I thought… “This is my kind of friend!”

We fast walked to Union Square which was about 10 blocks from where the ferry was. As we were getting closer, I could feel the excitement rise up inside of me. It’s as if I couldn’t walk fast enough! When we were about a block away I could hear the speakers and the butterflies were going crazy in my stomach. We walked up the stairs and we were greeted with hundreds of people holding signs and at that moment, all the butterflies went away. I made it.

Alison and I headed towards center stage to see the speakers. I stopped a few times to take photographs of all the signs. I wanted to document this event as best I could because I knew I would write about it. A friend of mine came with her family so I left Alison for a moment to find them. I hung with them for a little then continued to walk around and take photos of the signs and people.

When I returned to where Alison was, I stood amongst hundreds of people listening to different motivational speeches, we watched a skit which the children preformed in, and we heard a few songs/poems from a couple different artists.

Before the march started we all faced the west, south, east and north and prayed for love, compassion and understanding to all the people in those directions. Especially for the indigenous tribes that are disappearing due to greed and destruction of the planet. Then I believe it was a Native American Indian that started chanting with a drum.

At that point I almost lost myself.

The energy that surrounded me is something that I can not even begin to describe. It was empowering and uplifting. It was positive and fulfilling. We always talks about “living in the moment” and at that point, I can truly say, I was living it. I was completely and undeniably so present in the moment that I felt the energy just rush through my body. I was so overwhelmed with emotions that I immediately felt the tears well up in my eyes but I held it together for the most part. Although, now reflecting back on it I should have just let them flow.

Seeing all the people uniting together, sending love and compassion to people around the world, and standing up for something they believe in was something that I will never forget. It was absolutely amazing.

After the chants/prayers, they called all the mothers and children to head to the front to lead the march. Alison and I made our way to the exit point and then it was on! Police blocked the streets and let us march down Market St. The group of people was so big I guarantee there were at least 5-7 different chants going on in different places. It was estimated that there was a couple thousand marching!

During the march a few chants we yelled were:

It was so much fun!

Our march ended at the Embarcadero. At that point, Alison wanted to take a break so she headed off to the ferry building and I stayed to soak up more of the moment. The leaders of the march allowed a few minutes to go by to let the rest of the people filter in before more people spoke. It’s always a great feeling listening to motivational speakers and hearing the crowd get into it as well. The energy was still strong.

After the speakers, we chanted a little bit more and then heard Food Fight by Earth Amplified performed live which concluded the event. I met Alison back on the ferry where we chatted with a wonderful woman by the name of Renee (a permaculture teacher).

All in all, it was a spectacular day! I feel so blessed to have been part of something so moving and so inspirational! My soul was fulfilled and it confirmed my calling of doing whatever I can to educate people and bring awareness to our food issues.

Although the mainstream media has blacked out the events from all over the world, I hope through social media we can spread the word about it. Monsanto will not stop us!

I’ve included a video I made that highlights videos and photos I took throughout the day. Enjoy!