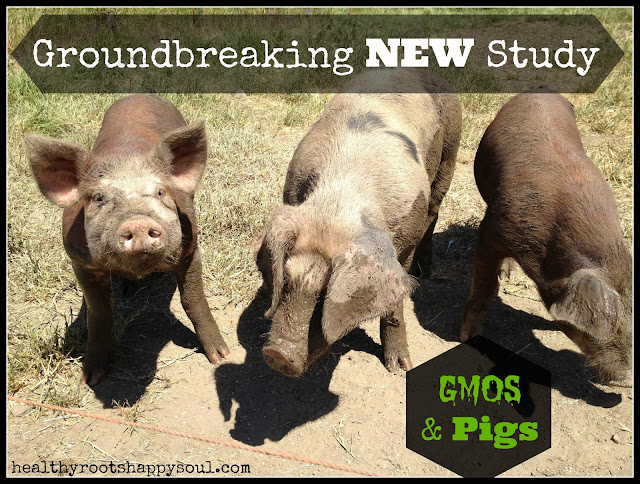 Tides may be turning with GMOs and I have a feeling Monsanto is starting to lose their grip. (Hopeful thinking!?)

A groundbreaking study has just been released regarding pigs and GMOs!

This study was conducted in the United States, on real farm situations, using pigs, for over a period of five months.

“168 newly-weaned pigs in a commercial piggery were fed either a typical diet incorporating GM soy and corn, or else (in the control group) an equivalent non-GM diet. The pigs were reared under identical housing and feeding conditions. They were slaughtered over 5 months later, at the usual slaughter age, after eating the diets for their entire commercial lifespan. They were then autopsied by qualified veterinarians who worked “blind” – they were not informed which pigs were fed on the GM diet and which were from the control group.

The GMO feed mix was a commonly used mix. The GM and non-GM diets contained the same amount of soy and corn, except that the GM diet contained a mixture of three GM genes and their protein products, while the control (non-GM) diet had equivalent non-GM ingredients. Of the three GM proteins in the GM diet, one made a crop resistant to being sprayed with the herbicide Roundup, while two were insecticides.” (source)

In comparison, female pigs were 2.2 times more likely to get severe stomach inflammation when on the GM diet, males were 4 times more likely. The research results were striking and statistically significant on all terms. (source)

So what makes this study so significant? Below, I’ll list 4 huge reasons why —

Normally studies are done in laboratory settings which sets this pig study apart from the rest. Being that it was done on real farm conditions, all normal factors in the daily life of these pigs were taken into account. Not only that, as an “added benefit scientists had strict controls that are not normally found on farms,” lead researcher Dr Judy Carman states. (source)

I personally can’t see what Monsanto can come up with to belittle this portion of the study because this study is the real deal. (I will be amused to see if and what they come up with)

It is of great significance that the researchers used pigs because they are in our food supply, unlike rats. We eat the pigs so if they are having issues it will no doubt filter into our bodies as well.

You honestly can’t believe if you eat animals that have been sick that it won’t have any repercussions to your health?

3. Pigs Have A Similar Digestive System to People

If these poor pigs that are fed GM diets (the normal in conventional farms) are having serious digestive issues and inflammation then how can you not assume this is what is happening to us. I know, we shouldn’t just assume things, especially big things like this but come on, use your common sense!

If you eat something that has poison in it you are going to get food poisoning, right? Well then what is the difference if you are eating pigs that have been eating an equivalent to poison?

Pigs are becoming meaner because their digestive tract is inflamed and irritated. In our society now, we are having shootings left and right and violence is becoming worse — could the two be related? I’m a very skeptical person but I would not be surprised if these Frankenfoods are creating this kind of damage in us.

And how is it that so many people are so sick these days? The United States is a super unhealthy country and what is the most prevalent source that is different than the rest of the countries? OUR FOOD! I honestly don’t believe it’s just a coincidence that so many people these days have all sorts of diseases (all of which the underlying factor is inflammation) and it has nothing to do with our food supply. Do you?

One of the biggest problems is that pro-GM scientists and advocates assume that these genes they have made in a lab will have no repercussions and will work exactly how they expect them to.

They may work to their liking in labs but when they are in the real world, it is a silly thing to assume that these newfangled genes won’t go out of control. Nature has been evolving and adapting for longer than we can even fathom and to try and play God with these things is foolish.

Nature will win. It always has.

In this study, researchers found when they fed the animals a mixture of crops containing three GM genes and the GM proteins that the genes produce, there were adverse effects. Thanks to Monsanto and their lobbyists there is absolutely no food regulator in the world that requires a safety assessment for the possible toxic effects of GM mixtures. Maybe if you want to give them the benefit of the doubt that they had no idea this could happen then.. well, it proves my point. How is this ethical to do when you have no idea what the results will be and it could potentially create mass destruction around the world?

There have been numerous cases where farmers and veterinarians have reported that their animals (fed on a GM diet) were suffering from numerous ailments including inflammation of the stomach and small instestine, stomach ulcers, a thinning of intestinal walls and an increase in hemorrhagic bowel disease, where a pig can rapidly “bleed-out” from their bowel and die. (source)

Iowa-based farmer and crop and livestock adviser Howard Vlieger, one of the coordinators of the study, said: “In my experience, farmers have found increased production costs and escalating antibiotic use when feeding GM crops. In some operations, the livestock death loss is high, and there are unexplained problems including spontaneous abortions, deformities of new-born animals, and an overall listlessness and lack of contentment in the animals.” (source)

I don’t know how many of you have seen Jeffrey Smith’s documentary, Genetic Roulette (if you haven’t, I highly recommend buying it and showing all your loved ones) but if you have, you can recall him interviewing numerous farmers who have all testified that their animals were suffering when on GM feed. Of course there was no scientific documentation to back it up but now there is proof in the pudding!

To find an easy-to-read summary of the study click here –> https://gmojudycarman.org/wp-content/uploads/2013/06/Clear-English-explanation-of-the-study-for-website-11Jun13.pdf